DIVUS OPTIMA – The interface to your building automation system

Both KNX SERVER  and KNX SUPERIO will show the functions of your system in a stylish and intuitive way: through the OPTIMA interface.

Get an idea of how your visualization with DIVUS OPTIMA might look like. Simply click on the following link to be redirected to our demo server: 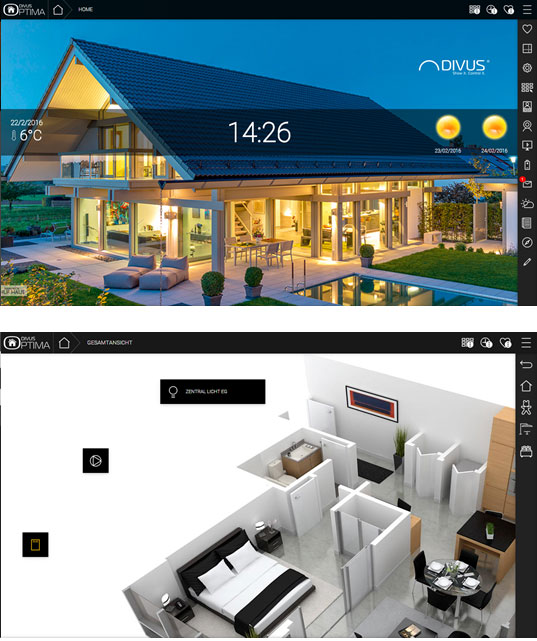 Every single point of light in your building can be controlled quickly and easily via the OPTIMA interface: thanks to a variety of graphic elements, dimming operations or the color selection of RGB lighting elements can be performed in addition to simple ON / OFF actions.

Should you happen to be away from home, DIVUS OPTIMA takes over the service for you: the flexible calendar planning allows you to define switching operations at specific times, if necessary even over weeks or months.

Of course, you can also add individual points of light to group circuits; Thanks to the personalizable scenarios of DIVUS OPTIMA, you can independently assemble various functions and control them via a single graphical element in the visualization, without having to change anything on the KNX system. 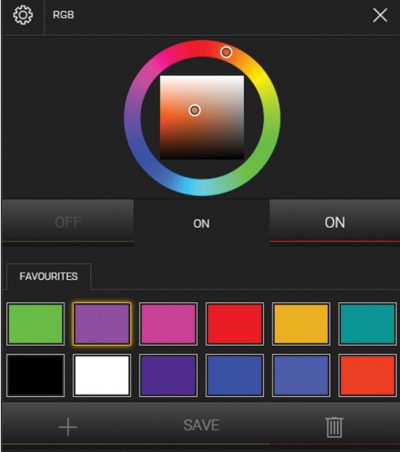 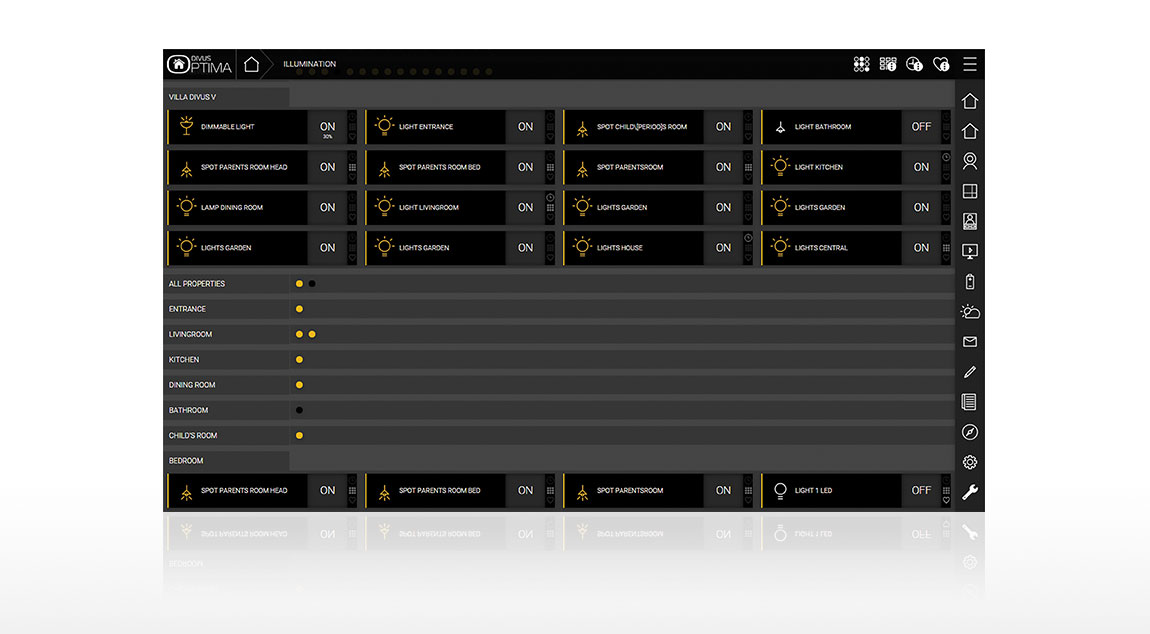 The possibility to integrate intercom functionalities into the OPTIMA interface has become a reliable and very popular feature of the KNX CONTROL products. Due to the usage of VoIP technology the OPTIMA interface assumes the functionality of a small phone central and permits to integrate external units, IP phones, PCs & MACs, mobile devices and – if necessary – also gateways to external phone lines. It is only required that the devices using the VoIP functions are compatible with the SIP standard.

Incoming calls from the door station are shown on the integrated client devices of DIVUS OPTIMA and can be handled through a pop-up window. If the door station offers also a video signal, it can be displayed together with the incoming call. The graphical interface lets you accepts or decline the call, switch between different camera signals and also execute additional functions, like the door opener or other actions in the KNX system.

An additional advantage of the INTERCOM module is the possibility to connect KNX actions and VoIP calls: so it is for example possible to start calls automatically, depending on certain events within the KNX system. Furthermore, virtual phone numbers can be created and associated with KNX functions; if the number is called by a device like an IP phone, the associated KNX functions will be automatically executed.

As if this functionality would not be enough, your KNX CONTROL device can also be connected to an external phone line (either SIP or analog through a corresponding gateway); now, intercom calls can also be directed to numbers of the conventional phone and mobile network.

A flexible and simple energy management solution is becoming really important in the home automation sector: whether it is the desire to keep the energy costs as low as possible or the usage of alternative energy source to produce your own energy: the information provided by the energy system should be accessible in a clear and simple way.

The registered value are not only for information, but can also be used to switch on or off single loads or consumers. This integrated load control feature can be customized and will permit you to keep your energy consumption always within the desired range. 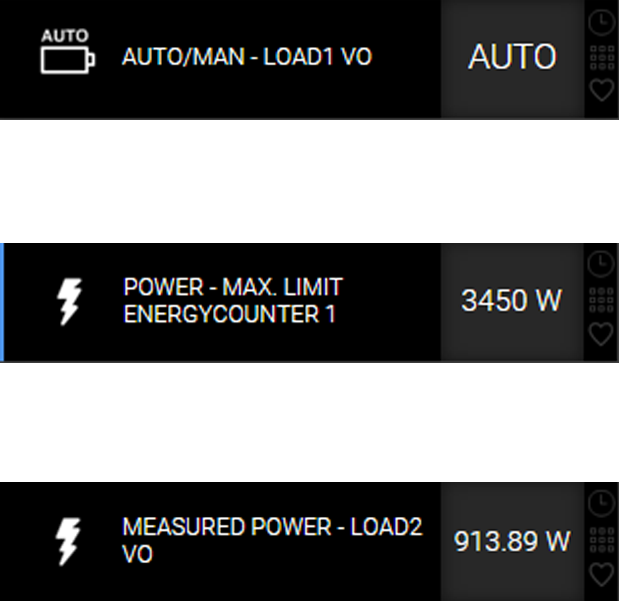 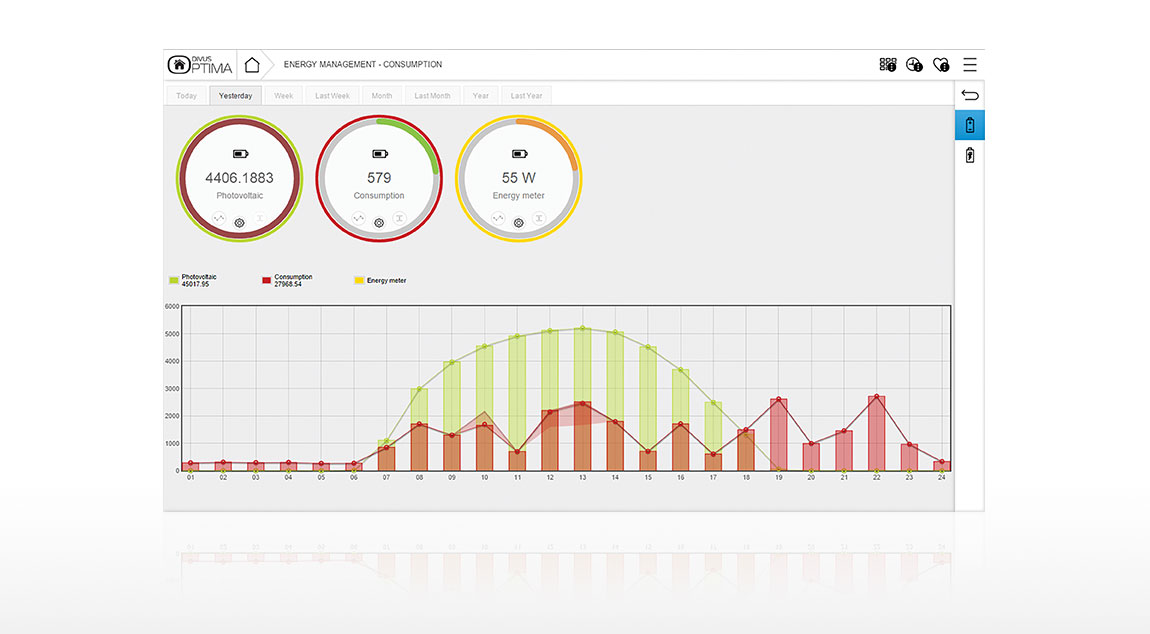 Your KNX CONTROL device is able to communicate with different types of alarm systems, as long as they offer a KNX gateway. The function library of the KNX CONTROL family already contains the most common graphical templates, which permit to get messages or alerts within the OPTIMA interface and to control the available options.

Thanks to the different logic and event functionalities integrated in your KNX CONTROL device, the information from the alarm system can also be used to trigger certain actions within OPTIMA, for example the dispatching of notifications via mail. Furthermore you can arrange page jumps to certain areas of the visualisation: just let the camera surveillance page automatically appear as soon as the presence sensor in the garden reacts. 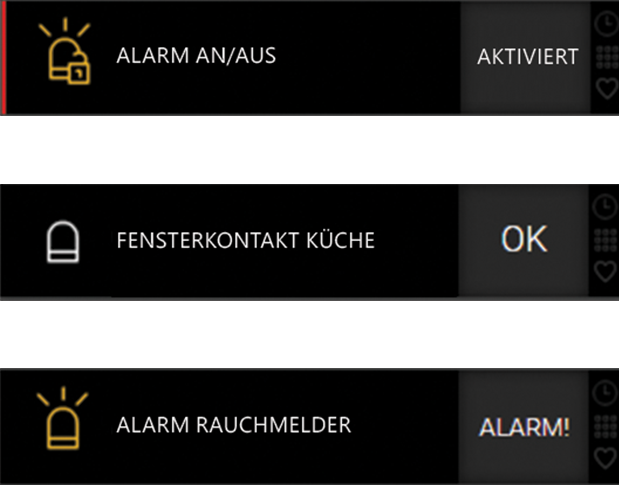 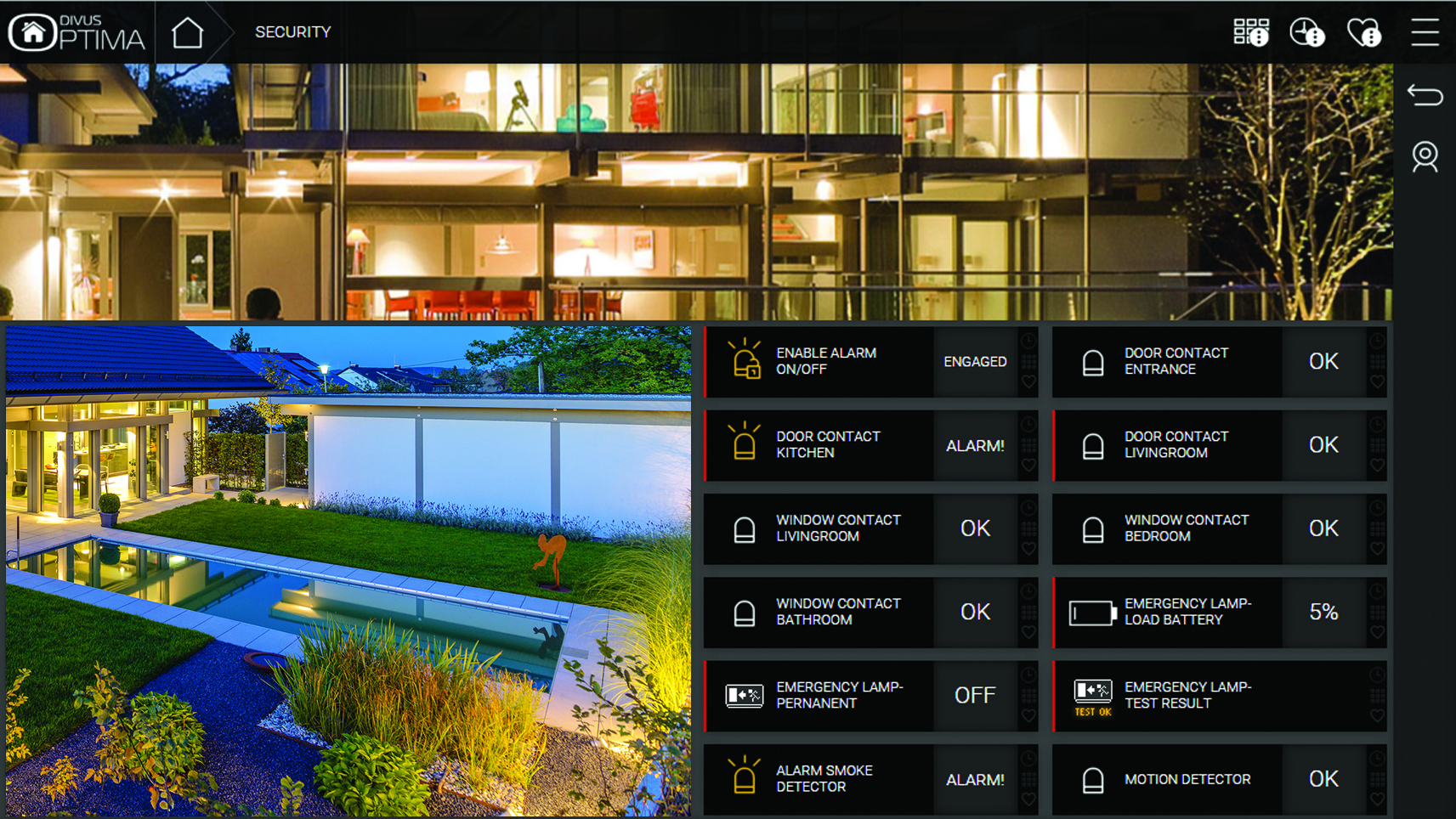 With DIVUS OPTIMA you can schedule nearly every contained object; whether you want to start a scenario at a certain time or you want to control an irrigation valve directly: just use the simple scheduling options of the OPTIMA interface in order to achieve the desired functionality.

Beneath simple daily time plans you can also use long-range scheduling, for example weekly or monthly plans (if required, even considering holidays or seasonal changes). The scheduling function is accessible directly from within the visualisation and can therefore be easily adapted. 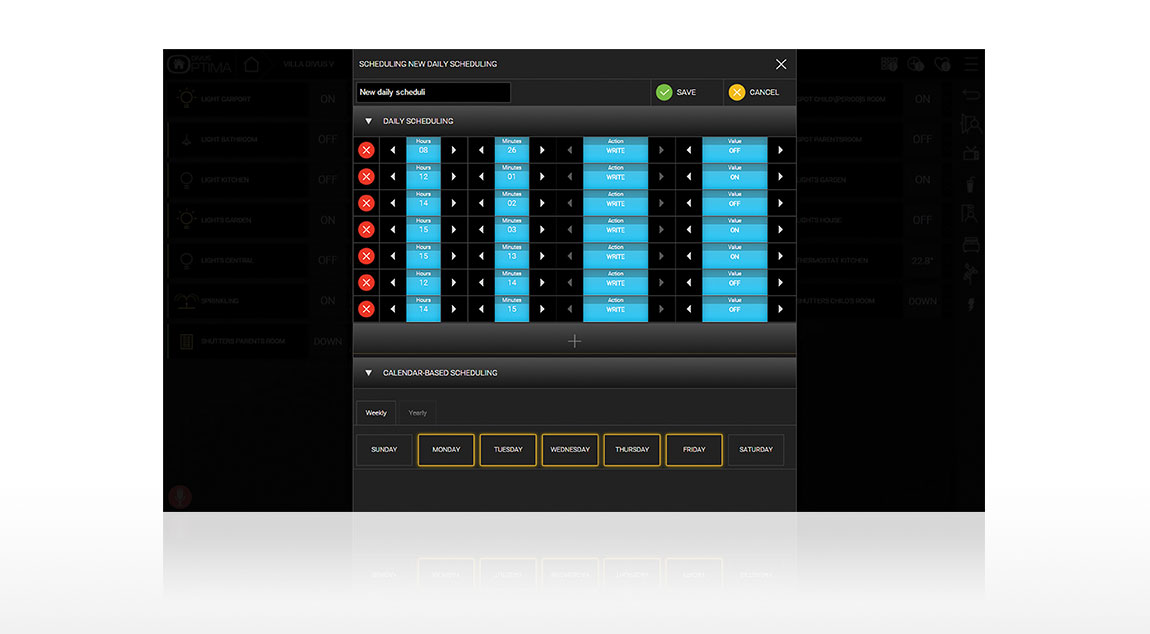 Your KNX CONTROL device can be combined with any kind of KNX temperature sensor or room controller and takes control over of all heating or cooling functions of your home.

In this way, all the parameters necessary to control the room temperature in a correct way (operating modes, setpoints, ventilation speed, etc.), can be shown in a separated pop-up window, which will automatically be reduced to a simple temperature indicator if not in use.

Thanks to the OPTIMA interfaceyou can also schedule the climate functions and therefore adapt the temperatures for different time ranges. Using the different daily, weekly or monthly scheduling, you can be sure that the temperature in your home will always fit your expectations. 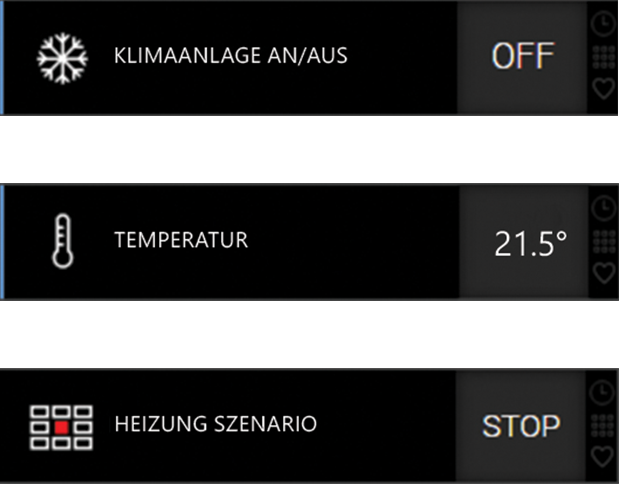 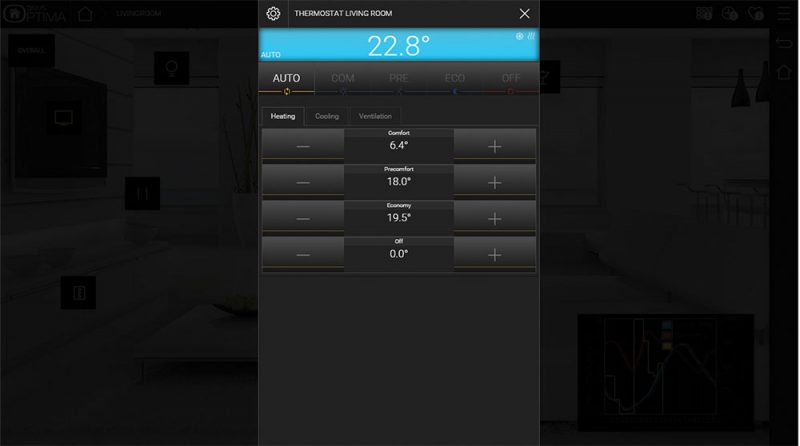 DIVUS OPTIMA gives you the possibility to create your own scenarios, which permit to handle different kind of commands in a combined way. Whether it should be a cinema eve, a romantic dinner or the well-known “ALL OFF“ – command: one click of you is enough, for the rest there is your KNX CONTROL device.

The scenarios of DIVUS OPTIMA aren’t restricted to the KNX functions: you could also use the scenario in order to control one of the linked Multiroom or alarm systems, to send out notifications or to launch a VoIP / intercom call. The different actions can furthermore be executed with a temporal delay, which permits to run scenarios also over a longer time period.

The launch of a scenario can be done in multiple ways: either control your scenario manually through the visualisation or let the scenarios be started or stopped automatically by connecting them to a time scheduling or events that happen in the system. It is also possible to refresh the values that are stored within a value: by clicking the re-learn button of the scenario, its target values will be set to the current value of the system; small changes therefore can be made without any effort.

A typical example for a scenario is the control of an irrigation plant: after the start of the scenario the different valves – controlling the water flow in the different areas – will be opened; this happens with a time delay (freely selected, if needed also with holiday or seasonal exceptions) in order to irrigate one area after another. The execution of the scenario can furthermore be bound to a KNX weather station, for example to block the irrigation in case of rainfall. 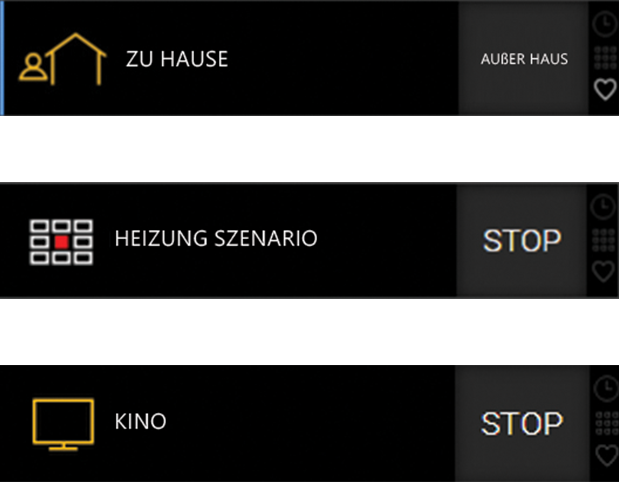 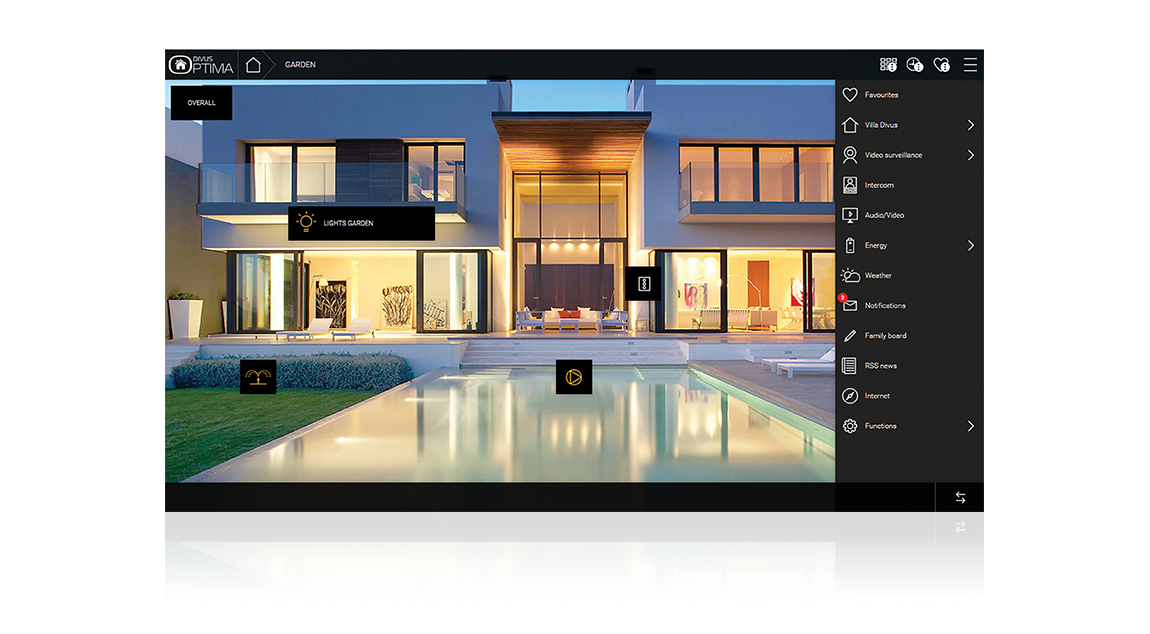 All kind of motorized doors, windows, shutters, blinds etc. can be controlled in a simple way through your KNX CONTROL device. Different graphical templates permit to distinguish perfectly between the different functions: you can for example control the position of your shutter using a slider, tilt a window with a simple click or you can even use the visualisation as control center in order to see which doors or windows are currently opened.

The single functions can also be connected, forming a complex object, or simply be part of a scenario, in order to keep the visualisation always clean and to raise its usability. 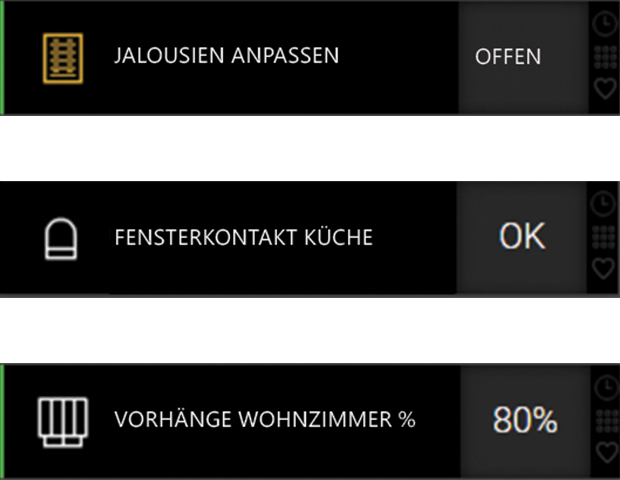 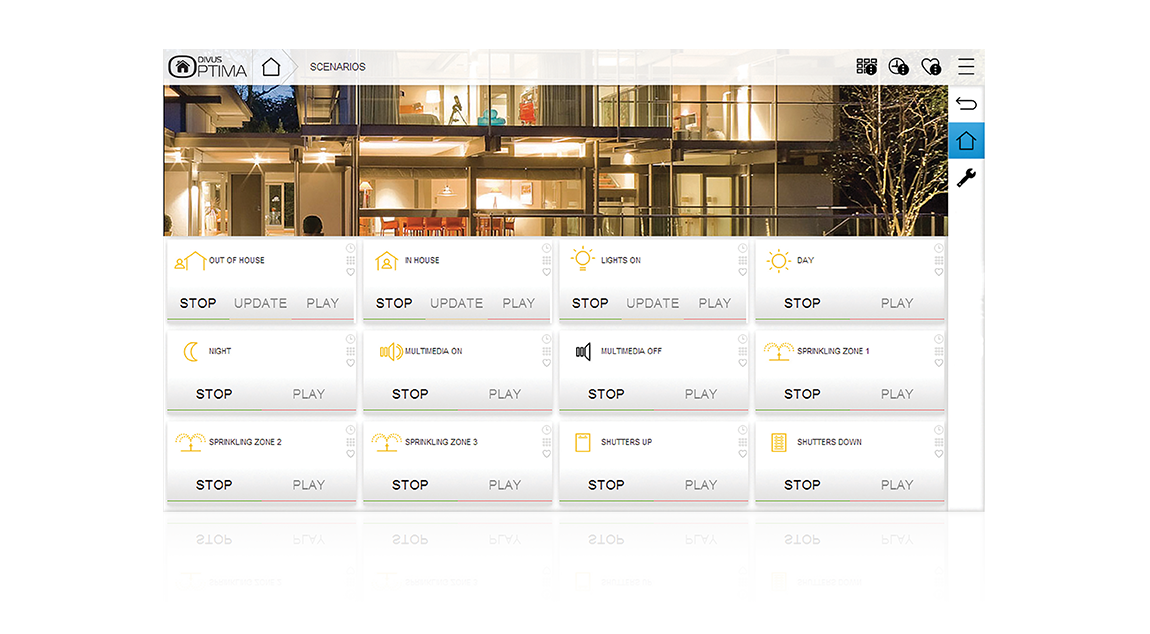 Here you can find the latest publications about DIVUS OPTIMA. If you do not find what you're looking for, please check out our tutorials or contact our support team. Many Thanks!

With our video tutorials we hope that you will be assisted with questions or uncertainties, or that you can simply satisfy your curiosity.

to the video tutorials >>

Subscribe to Our Newsletter to get Important News. Keep up on our always evolving product features and technology.

Do you need help?

In our product portfolio, you will find the right solution for your home or working area.
Go to the interactive catalogue